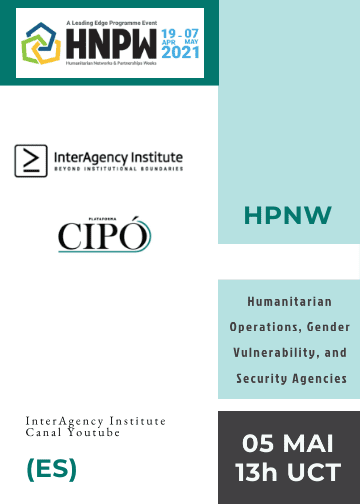 On April 28 and May 5, Plataforma CIPÓ participated in the event “Humanitarian Networks and Partnerships Week,” (HNPW) as part of a debate and simulation organized by the InterAgency Institute. The event brought together more than 2,000 specialists from organizations around the world to share knowledge and collaborate on best practices to solve common humanitarian problems.

The theme proposed by InterAgency, in collaboration with CIPÓ, was “Humanitarian operations, gender vulnerability and security agencies,” with a focus on the Venezuelan refugee crisis, especially the experiences and demands of women, LGBTI+, and children.

Two representatives of CIPÓ took part. On the 28th, Adriana Abdenur, Executive Director, presented research carried out by CIPÓ on the impacts of climate change in Brazil’s refugee reception areas on border between Brazil and Venezuela, identifying the main needs for implementing climate actions by through collaboration between different stakeholders.

CIPÓ researcher Luísa Falcão took part in the second session, held on May 5th, which took place in the form of a simulation between different actors, such as the Federal Police of Brazil, Armed Forces, UNHCR, the Ministry of Citizenship and non-governmental organizations. Based on the results of the previous debate, the objective of the simulation was to bring elements that qualify as possible alternatives and solutions for the coordinated confrontation of humanitarian demands, with a focus on the human rights of refugee populations. The simulation was guided by the following questions:

“What are the primary attributions for the guarantee of human rights of benefits in transit?”

“What are the actions that imply in coordination environments involving the represented agency?”

“How to increase the relationship of your governance sub-structure (s)?”

Report of the Webinar “Partnerships for the forest: strengthening international cooperation against environmental crimes in the Amazon”

Report of the Webinar “Partnerships for the forest: strengthening international cooperation against environmental crimes in the Amazon”